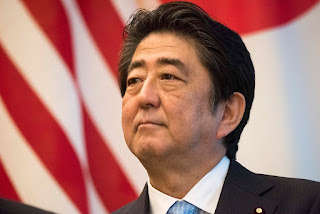 Former Japanese Prime Minister Shinzo Abe was shot and killed at a campaign rally on Friday. He was an ultra-nationalist who was in office longer than anyone else and was set to leave in 2020.

At the scene of an attack that shocked many people in Japan, which is one of the safest countries in the world and has some of the strictest gun control laws anywhere, police tackled and arrested the suspected gunman.

The current Japanese Prime Minister, Fumio Kishida, told the media, "It is cruel and evil, and we cannot stand for it."

Police say that Tetsuya Yamagami, who is 41 years old, shot Abe twice while he was giving a speech in the city of Nara. The first shot missed, but the second one hit Abe in the chest and neck. Even though people tried to save him, he died a few hours later.

Police say Yamagami had been out of work for three years and was a former member of Japan's Maritime Self-Defense Force. They say he attacked Abe because he thought Abe was part of a group Yamagami hated. Later, several guns that Yamagami had made himself were found at his house.

People from all over the world paid their respects.

In a statement, President Biden said that the assassination "stunned, outraged, and deeply saddened" him. He also called Abe his friend. "His dream of a free and open Indo-Pacific will stand the test of time."

The Secretary of State, Antony Blinken, who is in Asia for a meeting of the Group of 20 foreign ministers, called the assassination "deeply disturbing" and said that Abe was a leader with a lot of vision.

Indian Prime Minister Narendra Modi said that Abe was "a towering global statesman, an outstanding leader, and a remarkable administrator." He said on Twitter that India would have a national day of mourning on July 9.

Abe made a lot of progress in the economy, but he didn't achieve his goal of changing Japan's constitution.

As prime minister, Abe worked to improve Japan's military and counter China's growing power. He also tried to improve and reform the economy through a program that became known as "Abenomics."

During Abe's time in office, the immigration policy was changed, more women went to work, and the Japanese economy grew faster than expected.

Michael Green, a former staff member of George W. Bush's National Security Council who worked closely with Abe, said that Abe was the most important leader Japan has had in the modern era. His plan to put Japan back on the geopolitical map made the country's bureaucrats and elected leaders loyal to him.

Green told Morning Edition, "I think his legacy is important." "No major political figure in Japan is arguing for a different direction from what Abe set up when he was prime minister, other than small changes in tactics."

Shinzo Abe of Japan is troubled by the past.

Green said that when the U.S. seemed to be losing its footing in the region in recent years, Abe kept things from falling apart.

When President Trump pulled out of the Trans-Pacific Partnership, a major trade deal in Asia, Abe stepped in to keep it going and asked the U.S. to come back, he said. "When the Trump administration was fighting with Europe at the G7 summits, Abe was the peacemaker. He really stepped up to strengthen the international order, the liberal order that America helped build, as China and Russia asserted themselves."

In the end, he and his party did not achieve their most important political goal, which was to change Japan's pacifist constitution from after World War II. Abe's proposed changes would make the government's emergency powers stronger and give human rights less importance. Abe thought that the political values in the constitution, which were backed by the U.S., were not in line with some of Japan's traditions, like respect for the emperor.

On the other hand, Abe was able to get a law passed in 2015 that lets Japan's military do more overseas to help allies like the United States.

And Abe was getting more and more critical of China.

When he left office, most Japanese people didn't like how he dealt with the coronavirus pandemic. They thought he moved too slowly to declare a state of emergency, mostly because he was worried about the economy.

Abe has been more critical of China in recent months. Earlier this year, he asked the U.S. to stop its long-standing policy of "strategic ambiguity" and tell Taiwan that it could count on American help if China attacked.

He also upset China when he said, "A Taiwan emergency is a Japan emergency" and said that it would be impossible for Japan to stay out of a conflict over the self-governed island that Beijing considers to be part of China.

This story was put together with help from Jackie Northam and Christopher Dean Hopkins of NPR.