‘Are All Tahitian Pearls Black?’ and Other Pearl FAQ Answers 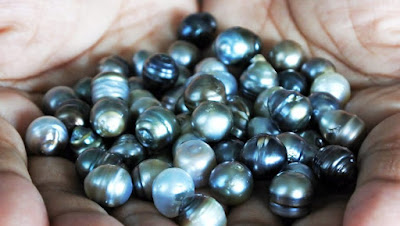 Are all Tahitian pearls black? What’s the difference between a cultured pearl and a natural pearl? Are freshwater pearls inferior to saltwater pearls? Are South Sea pearls really golden?

Good questions. With all the different pearl colors and types out there, it can be difficult to know just what you’re looking at. For those interested in buying pearls, or for gem enthusiasts who wish to learn more, here are answers to some of the most commonly asked questions about pearls.

Are All Tahitian Pearls Black?

Not only are Tahitian cultured pearls not exclusively black, they’re also not grown in Tahiti. Called “black” because of their exotic dark colors, Tahitian cultured pearls can also be gray, blue, green and brown. And they’re grown in the lagoons of small islands that are part of a group known as French Polynesia. Tahiti, the largest island, serves as the group’s center of commerce, and not as a pearl growing mecca.

Tahitian pearls are cultivated for about two years in Pinctada margaritifera cumingi, a large mollusk native to French Polynesia. One of the ways this unique oyster differs from other species is its interior shell color, which is dark. This so-called “black lipped” oyster also has black mantle edges—the “lips” that give this animal its descriptive name.

Today, the most sought-after Tahitian cultured pearls are dark green-gray to blue gray with rosé or purple overtones. Pearl colors are determined by several factors, including variations in the host oyster, color variation of the implanted donor mussel tissue, the number and thickness of nacre layers, and variations in growing environment such as temperature and water quality. Tahitians are most often variations of gray, black, green and blue, but other colors exist.

At an average size of 8mm-14mm, Tahitian cultured pearls—especially those specimens that are gem-quality and round—are very expensive. According to the latest information from the Gemological Institute of America, up to 40 percent of implanted black-lipped oysters produce a gem-quality cultured pearl, but only about 5 percent of the pearls they produce are round. And only 1-2 percent of the entire crop will result in round cultured pearls of the finest quality. No wonder a Tahitian pearl strand is so costly! If you want to wear Tahitian cultured pearls, one way to do so without breaking the bank is to choose a pendant-style necklace with a single pearl, pearl stud earrings, a single pearl ring, or baroque (non-symmetrical) pearls. These designs are every bit as exotic and a lot more affordable than a matched strand.

What’s the difference between a cultured pearl and a natural pearl?

Natural pearls are formed when an irritant, such as a parasite, makes its way into a pearl-producing animal such as an oyster or mollusk. To protect itself, the animal coats the irritant in nacre—a combination of organic substances that also makes up what we call mother-of pearl. Over time, the layers of nacre build up around the intruder and eventually form the organic gem we all know as the pearl.

Cultured pearls are formed in the same way as natural pearls, with one big difference: they get their start not by chance, but deliberately, when man intervenes with nature. To produce cultured pearls, a skilled technician, called a nucleator, induces the pearl-growing process by surgically placing an irritant—a mother-of-pearl bead and a piece of mantle tissue, usually—into a mollusk. The animal is then placed back into the water and monitored, cleaned, etc. until the pearl is ready to be harvested.

The Chinese have been culturing freshwater blister pearls (pearls that grow underneath the mantle on the inside of the animal’s shell) since the 13th century, but Kokichi Mikimoto, a Japanese man, is credited with developing modern pearl culturing techniques. By the early 1920s, Mikimoto was selling his cultured pearls worldwide.

It depends on who you ask, but many pearl experts today agree that freshwater cultured pearls can rival the beauty of their saltwater cousins. Due to improvements in culturing techniques, freshwater pearl farmers are producing beautiful, round, lustrous pearls that are a vast improvement over the wrinkled, rice-krispie-shaped gems that typified the freshwater pearl crop of the not-so-distant past.

Produced mainly in China, freshwater pearls are often nucleated, or implanted, with mantle tissue only (rather than a mother-of-pearl bead). Because they do not contain a starter bead, tissue-nucleated freshwater pearls are 100% nacre. This gives them a beautiful luster and a durable surface that won’t easily flake or peel to reveal the inner bead. By contrast, pearls that are bead-nucleated and harvested too soon often have only a thin coating of nacre that will flake or peel. This is a major problem: Unlike many other gemstones, pearls cannot be polished back to perfection.

Overall, freshwater pearls are more plentiful than other pearl types, thus they are generally more affordable.

Yes. Pearls produced in the aptly named “gold-lipped” oyster (P. maxima) can be a gorgeous creamy yellow, referred to as “golden” in the trade. (The silver-lipped variety of P. maxima produces beautiful silver or white pearls.) Grown in the South Seas—which stretch from the southern coast of Southeast Asia to the northern coast of Australia—these pearls are grown in one of the biggest oysters used in pearl culturing. Because they can accept a larger bead and secrete nacre faster than their smaller counterparts, these big oysters produce large pearls of exceptional luster and beauty. South Sea pearls’ thick coating of nacre gives the gems a wonderful luster, or glow, that appears to come from deep within the pearl. The warm waters, abundant food supply and low pollution levels of the South Seas also help these oysters produce beautiful cultured pearls.

Although Australia produces 60% of the world’s South Sea cultured pearls, Indonesian farmers work more with the gold-lipped oyster, and thus produce more golden pearls. The silver-lipped variety produces equally beautiful pearls that come in white to silver and often have rosé, blue or green overtones. Aside from giving them a light wash, pearl farmers do not treat South Sea pearls after harvest.